Nights Called Milan is not only in Osaka. After the success received by the initiative in Japan, it arrives in Milan thanks to Asian Studies Group in collaboration with its artistic and theatre residence: Corte dei Miracoli. This event is one of the many occurrences realized by Milano Genius 2019 in order to enhance the relations between the two twinned cities. Milano Genius 2019 is patronized by the Municipality of Milan and produced by the Italian Cultural Institute in Osaka in collaboration with ASG-Produzioni, branch of Asian Studies Group.

Nights Called Milan will carry on its journey on the 30th of May in Milan at Corte dei Miracoli, a space not new to events of such importance and that is perfectly suited for hosting them. The experience is an opportunity for everyone involved to achieve visibility, especially for the artists Michele Gorlero and Alberto Mancini that will perform the repertoire of the most famous Milanese’s songwriters: Vecchioni, Jannacci and Gaber.

The duo has proven in Osaka how its two members work in complete harmony and respect for each other. The Japanese guests of the Swissôtel Nankai in Osaka were completely charmed by the collaboration of the two artists. They were able to easily surpass and overthrow the linguistic barrier, an achievement that only few can say to have accomplished during their career. We previously asked Michele Gorlero his thoughts regarding the Nights Called Milan’s event in Osaka. The interview can be found at the following link: Interview with Michele Gorlero.

ASG-Records, branch of Asian Studies Group, wishes to set the basis for their future success. Nights Called Milan at Corte dei Miracoli will be the perfect occasion to promote the new duo. An evening entirely focused on Milan in which Milanese artists will portrait their personal view of the beautiful city that is Milan. Soon everyone will be able to listen Michele Gorlero’s voice and Alberto Mancini’s piano from their home, since ASG-Records will record them on Spotify. 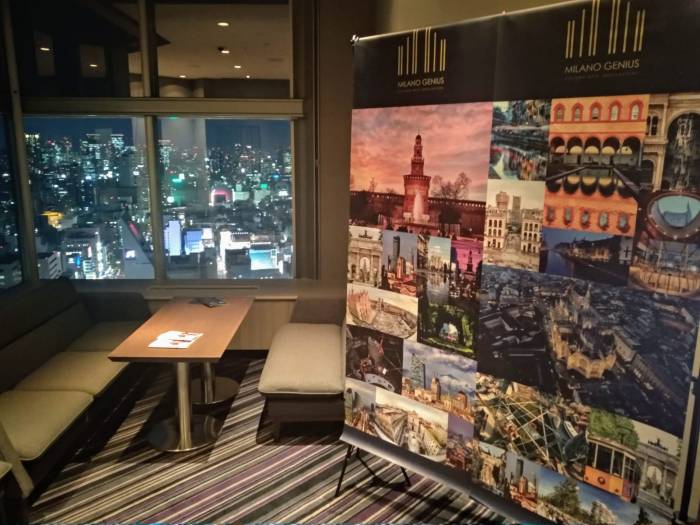 Nights Called Milan has just started in Osaka and in order to celebrate the success that it is receiving across the ocean, we wish to offer you an interview with Michele Gorlero, voice and essential figure of this initiative.

Milano Genius 2019 pursues the goal of enhance the relations between the two twinned cities of Milan and Osaka offering the Nights Called Milan initiative produced by the Italian Cultural Institute in Osaka alongside the Swissôtel Nankai in Osaka. This project is patronized by Municipality of Milan and is sponsored by iFOODQ and distributed by ASG-Produzioni, branch of Asian Studies Group.

Before the start of the interview, we offer you a quick introduction to Michele Gorlero made by Paolo Cacciato, Director of Asian Studies Group and focal member of the production of Milano Genius:

Michele Gorlero is an artist that has already started to focus his professional theatre experience in order to approach the Japanese culture and society. This can be seen thanks to his participation as co-protagonist in the Asian Studies Group theatre production Fushikaden. Michele immediately came to my mind for the Nights Called Milan initiative. I believe that his sensibility and skill will reach the Japanese public that will be bewitched by a play in which words’ meaning leaves the narration to voice and gesture.

What is your opinion regarding the Nights Called Milan event in which Milanese music meet the typical Lombardy’s cuisine?

I was born in San Remo, but I lived in Milan for twelve years, so I consider myself as an adopted Milanese. Regarding Nights Called Milan, I believe that Milanese cuisine and songwriting tradition are two excellence of our country. This experience focused on the cooperation between those aspects will allow the mutual growth for both of them, while emphasize the Milanese atmosphere and tradition. Nights Called Milan will permit to everyone, especially Japaneses, to experience emotions common to us Italians but that can be expressed differently in some societies. Our art is completely different from the one in Japan especially when talking about music. In fact, there are themes that are completely new to Japaneses and the first example of this statement that comes to my mind is the song “La Parola Io” of Gaber that translates in “The word I”. This play focus itself on the personal ego inside every person and I believe that it will allow to the guests of the Dinner Gala to experience and consider for their first time this particular and selfish aspect that the songwriter decided to analyze. I look forward to watching firsthand how Japaneses will relate to the Italian way of life.

Do you believe that the meaning of the track will be able to surpass the linguistic barrier and reach the Japanese public? Furthermore, what is your personal experience with Japan?

I see the linguistic barrier as a valuable addition to every play. I consider it as a thin veil that if used right can bring great profit to the show. The producers of Nights Called Milan had the brilliant idea to deliver to the guests a description in Japanese, English and Italian regarding the meaning of each song. Even if the attendants won’t have an exact translation, that will be for the better since this decision will allow them to bond the meaning of the texts given to them and the words that will come out of my mouth. This procedure is commonly used in abstract art exhibitions in order to give to people the opportunity to think critically and to give their own interpretation regarding what they see. Vecchioni, Jannacci and Gaber were three songwriters very experienced in transmitting emotions to their public. They were true masters of their sector and I believe that thanks to their work even Japaneses will be able to understand what we wish to communicate to them. Many of the songs chosen for Nights Called Milan contain a deep meaning that cannot be understood focusing only on their texts. For example, without spoiling anything too much, I will sing a particular track in a jolly way while my coworker, Alberto Mancini, will play his piano in order to express sadness and anguish. Thanks to those arrangements made by the songwriters, the public will surely make an inner analysis to give the song the meaning that suits it the most. This type of correlation is different for each person and is easily influenced by what we experienced during our life. I was always fascinated by Japan. In fact, I already had the pleasure to work in Italy in productions focused on the Japanese way of life like Fushikaden. This experience will be my first opportunity to export the Italian culture in Japan and I live this duty as a great honor and pleasure. I honestly believe that Nights Called Milan will be a wonderful experience.

Milano Genius: Arte, Cultura e Innovazione is project that accentuates through the creative side, concerning Milan and its dynamism, an occasion of comparison, collaboration and development of creative topics between Italy and Asia.

Milano Genius is a cross cultural project ideated and created by Stefano Fossati (director of the Italian Institute of Culture Hong Kong, former director IIC Osaka) and Paolo Cacciato (director of Asian Studies Group)  with the aim of promoting arts, culture, innovation and all manifestation of intellectual achievements as high value’s core contents for sharing of perspectives for mutual development, and to open cultural dialogue and cooperation between Italy and Asia.